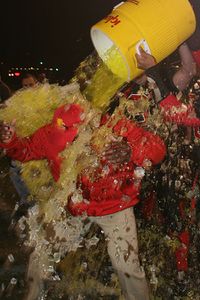 The Gatorade shower, also known as the Gatorade dunk and the Gatorade bath, is a sports tradition that involves dumping a cooler full of liquid (most commonly Gatorade mixed with ice) over a coach's (or occasionally star player or owner's) head following a meaningful win, like the Super Bowl.

The tradition began with the New York Giants football team in the mid-1980s. According to several sources, including Jim Burt of the Giants, it began on October 20, 1985, when the Giants beat the Washington Redskins 17-3, and Burt performed the action on Bill Parcells after being angry over the coach's treatment of him that week.[1] Burt insisted that Harry Carson dump the Gatorade on Parcells, because Carson was a favorite and wouldn't get in trouble.[2] However, former Chicago Bears defensive tackle Dan Hampton claims he invented the shower in 1984, when the Bears dunked Mike Ditka upon clinching the NFC Central.[2][3] The phenomenon gained national attention in the 1986 Giants season. Parcells was doused after 17 victories that season, culminating with Super Bowl XXI.

Boston Celtics coach Doc Rivers was reported to be the first NBA coach to receive a Gatorade shower when his team won the 2008 NBA championship.[4] Paul Pierce dumped a cooler of red Gatorade over Rivers as the Celtics closed out Game 6 to clinch their first NBA title in 22 years.

Kentucky Wildcats coach Guy Morriss is one of the only coaches ever to receive a Gatorade shower and lose a game. This occurred on November 9, 2002, during the Bluegrass Miracle, when LSU defeated Kentucky. Coach Morriss was showered immediately before Marcus Randall threw a Hail Mary pass to Devery Henderson to win on the final play of the game.

Many teams do not use Gatorade but instead use water as a substitute; for example, the Florida State Seminoles and the Miami Hurricanes use Powerade, due to Gatorade's affiliation with rival University of Florida. After Michigan State University's win over Penn State in 2010, Spartan players dumped a Gatorade bucket filled with green and white confetti on head coach Mark Dantonio. This was done because of the cold temperature and Dantonio's heart condition.

The tradition has become a mainstay of the Super Bowl; so much so that numerous gambling websites have established various 'prop bets' on situations during the game. Many of these bets are unrelated to the actual sporting event. For Super Bowl XLVI, a bet could be made on what color the Gatorade would be. Purple was not included, resulting in the refund of all bets.

In 2005, ESPN sports business writer Darren Rovell published a book entitled First in Thirst: How Gatorade Turned the Science of Sweat into a Cultural Phenomenon, in which he documented, among other things, the story behind the Gatorade dunking phenomenon.[2]

Retrieved from "http://footballdatabase.shoutwiki.com/w/index.php?title=Gatorade_shower&oldid=72"
This page was last edited on 4 April 2017, at 20:19.
This wiki is hosted by ShoutWiki • Staff Blog
Now hiring • Contact us or report a bug
Privacy policy • About American Football Database • Terms of use • Piwik optout • Mobile view